Dry rot in floorboards was only one of the problems we tackled today as the team met on a grey and overcast Thursday. 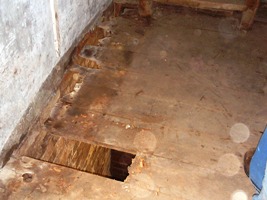 Dick was detailed off to insert a new joist under ends of the floor boards next to the front door of the mill. As he cleared the area it became obvious that the boards had rotted where they touched the wall. The fact that damp timber is subject to dry rot is one we are all too familiar with and must have been a fact of life for all watermill owners. We are hoping that modern chemicals can prevent further decay but we still have to repair or replace wood that is too far gone to be safe. The aim is to retain as much as we can to preserve the appearance and to replace with recovered timber were we can for the same reason.

Much of the timber of the hurst shows signs of dry rot and we have taken advice about how much work we need to do. Very little of the frame needs to be replaced although s bit of trimming and cleaning up needs to be done. A badly affected timber across the bottom of the opening for the waterwheel shaft has been removed entirely. That job was completed this afternoon by Richard, the only member of the team skinny enough to be able to work between the pit gear and the wall. Even this timber, as rotten as it appeared, had a solid core of sound wood and took half an hour of effort to saw off neatly.

Dave and Colin spent most of the day setting reinforcing bars and shuttering in place for another section of the underpinning around the gear pit. We took great care to fix the wheel so that it could not move so that Dave could work through the spokes of the pit gear without worrying about having his head removed if the wheel turned. We ran out of reinforcing bar but we are pretty sure that we can finish this section next week as long as we get more rebar. 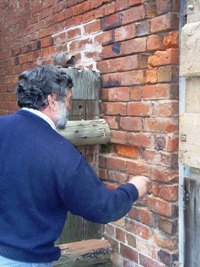 Max picked up where he left off last week, repairing the wall of the stable barn next to the door. This week he worked from the outside, pointing up the brickwork and replacing bricks that had eroded away or fallen out. The final stage will be to repair the doorpost, which is much worse on the inside than it appears in this picture. As with all the repairs to this brickwork, he is using lime mortar that is a good match with the original.

John continued his seemingly never ending task of building walls and steps, adding more courses to where he got to on Tuesday. Just for a change he got to lay a couple of bricks inside a void that Dick found under a rotten floorboard. This is a common theme of every day at the mill. We all help each other out as needed but we do try to make sure that each job has an owner who gets most of the credit in this diary.

One job that actually got finished today is the sealing of the waterwheel buckets. Richard applied the sealant to the last six buckets this morning, having turned the waterwheel before it was locked in place. Hopefully this will make the wheel turn more smoothly under water power than it did. The old buckets didn’t leak and the wheel turned faster when they were full of water than it did when the new buckets were doing the work so that the wheel was speeding up and slowing down each revolution.

Read about the dry rot? Click here to see the previous article.