Kim and Jim concentrated on the second of the pair of double gates today. 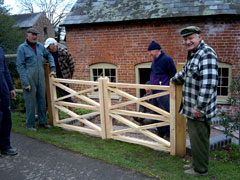 With the experience gained from making the first one they managed to complete the second, leaving only the final  finishing and the addition of hinges.

The design of the double gates is based on those into St Andrews Church next to the mill.

Four other members of today's team, John, Bob, Jonathan and Finton, shared a mixer load of lime mortar and did some more pointing of the stable brickwork. This is hardly the most exciting job  and any excuse would be used to take a break as you can see from the number of people admiring the new gates.

Jonathan managed to escape for a little while to make some more metal caps for posts, a job he has  become quite adept at. The idea is to protect the end grain of the posts from the weather and hopefully extend the life of the posts.

Richard avoided the tedium of pointing by making two hatches to fit the tun around the upstream pair of stones. These have the effect of decking over more of the stones, leaving only a square hole in the centre for the grain to run in. 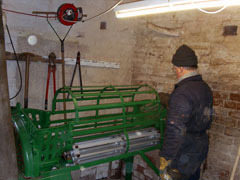 A direct consequence of last Thursday's finale, the grinding of corn for the first time since the 1920's. was a gift of a bag of forage beet. Exactly the sort of crop that the beet shredder is designed to process.

This was all the excuse we needed to get the waterwheel running to try out another piece of machinery.

It seemed a shame to get all the new paint dirty but we did anyway. With only a few beets they didn't feed along the rollers too well but  once they did get to the business end the machine made short work of reducing them to shreds. 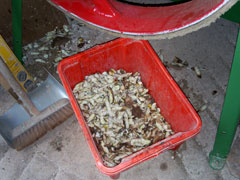 The upper picture shows Martyn loading beet into the shredder and the lower one is the resulting shredded roots.

Martyn and Colin spent much of the day sorting through the accumulated material in the stable, clearing the area that we want to install the big lathe. Progress was fairly slow as we kept on finding interesting bits and pieces that we had forgotten about including a set of platform scales that will look very good in the mill once we get them  cleaned up.

It wasn't too late when we packed up for the day as most of are going on the Dibnah's Day Out tomorrow. With a bit of luck the double gates will get hung next week.

Go to the previous entry before this double gates story