Colin Paul Baker, founder member, Vice Chairman and trustee of the Shelsley Water Mill Society, died on 23rd June after a short illness. Colin was born on 17th August 1942 in Kidderminster and went to school at Bennett Street  Junior School and then Harry Cheshire Secondary Modern School in that town. After a very brief spell in the design office of a carpet company he took an apprenticeship at Cheshire’s Printing Company. After completing his apprenticeship he moved on to a job as a car mechanic, working on the early Minis. He returned to the printing industry, working for a number of print companies before joining his father’s engraving and diestamping company in 1973. Here he set up a printing section that eventually became Efficiency Print Limited, the company he ran with his wife Drene until they both retired in 2005. 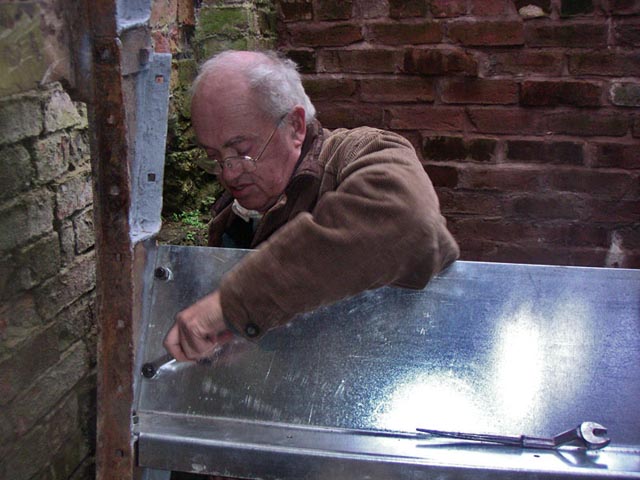 Colin first met Drene when he was nine years old and they were friends throughout their teenage years. They married on the 4th June 1968 and their daughter Rachel was born two years later.

Ever practical and ‘hands on’, Colin’s knowledge of cars started when he and his father bought an Austin Seven for £5 and proceeded to dismantle and re-build the engine. Colin was 16 at the time. By the early sixties he owned a Ford Consul, then a Ford Anglia and by 1967, a Sunbeam Alpine. Marriage and fatherhood might have eroded the passion for working on cars, never mind the demands of running his own company but in 1977, while on holiday, Colin spotted and bought a 1947 Alvis TA14. He spent the next 9 years on a total restoration, even going to upholstery classes and also learning to weld. Once the Alvis was restored he needed another project, so in 1989 he bought and totally restored the MGB which he and Drene have enjoyed ever since. Colin and Drene joined the Midland Automobile Club in June 2000, becoming  active members of the Classic Section and were soon involved in several Club activities. The trusty MGB went on many Classic Car outings including a tour of Ireland in 2011.

After they both retired in September 2005 it was  inevitable that Colin would look for another project to keep himself busy. The MAC would fill the gap when a call went out for volunteers to restore the water mill that the club had acquired when it renewed the lease on the hill-climb course. It is no surprise to all who knew him that Colin was at the head of the queue to take on the job. His practical  knowledge was to prove invaluable in the years that followed as the old mill was brought back from neglect and  dereliction into full working order. There is no such thing as a Haynes Manual for an 18th Century watermill, and working methods had to be made up on the spot. The waterwheel, in particular, is a testament to Colin’s abilities and determination. Three quarters of the metal buckets had corroded beyond repair and needed to be replaced. Colin was involved in both the manufacture of the new buckets and in the drilling of several hundred holes to enable them to be bolted into place.

His input was not only practical; he took on the role of Vice Chairman and Trustee of the Shelsley Water Mill Society, the registered charity that now looks after the mill. His trademark flat cap was responsible for the nickname given to the mill workers, who are known as ‘The Dibnahs’. As work on the watermill became less  demanding Colin felt the need for something else to keep himself busy and took on the restoration of a 1971 Rover P6 2000. He had just got this car MOT’d and taxed when he was taken ill.

Colin leaves behind his wife Drene, his daughter and granddaughter and many friends. His funeral took place at Holy Trinity Church, Belbroughton, Worcestershire on 8th Julydiv>

Go to the next entry