Yet again the weather affects the restoration work, this time a cloudburst that dropped nearly an inch of rain in half an hour.

Colin, Richard, Dave, Max, Derek and Headley got together as usual this Tuesday, but we were all keeping half an eye on the sky. Derek spent his time clearing rubble and rubbish and wisely made no attempt to light a bonfire.

Dave and Max worked on the hayloft steps while Colin and Headley concentrated on the waterwheel. Richard did a bit of brick cleaning and general loafing. There was one brief shower in the morning that had us running for cover, but it only lasted a few minutes.

Shortly after midday we paused for another shower, this time accompanied by thunder and lightning. After ten minutes it was obvious it wasn’t going to be a short shower so we adjourned for lunch, finding a spot in the black barn that didn’t have a leak.

We arranged ourselves around the table and watched the rain. It got heavier and heavier and became a veritable cloudburst. Visibility was very restricted and water was pouring off the barn roof and down the hill. The rain was hitting the ground so hard that the spray was blowing into the barn and there was white water flowing across the Start line. 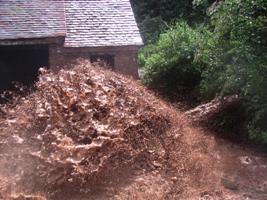 After half an hour or so the sky lightened, the rain stopped and the sun came out. We emerged from our shelter and started to have a look around. The mill-pool was one of our first thoughts, but we got side tracked by the watery noises coming from the farmyard. The picture doesn’t convey the noise or the power of the water rushing from the land-drain. The ground was vibrating from the impact. The water was rushing down the farmyard towards the paddock, flooding the barns on the way past.

We tore ourselves away from the sight and picked our way up to the mill pond. We were not surprised to find the pool nearly full and overflowing around the end of the dam. The newly restored parapet around the spill way was handling the overflow as intended and there was no real drama, just a lot of very muddy water. 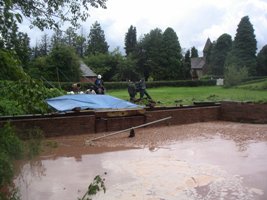 Gradually the team returned to the jobs they had started in the morning and by the end of the day both groups had made visible progress. Colin and Headley now only have three more back plates (properly called sole plates) to bolt into place in the waterwheel and these are already made and available. Their next task will be to add the buckets that will finish the job. Dave and Max even managed to lay a few bricks on the steps, having covered the working area just before the cloudburst. A different day at Shelsley Watermill but it would be nice to have some settled weather.

Enough about a cloudburst? Click here to see the previous article.