It might be a new month, but the same work is going on. The new brick steps are taking shape at the side of the waterwheel which is also progressing well. Window fitting is moving slowly but it is moving.

The team consisted of Martyn, Colin, John, Headley, Richard and Derek, all of whom have their regular tasks.

Martyn continued fitting the one window frame, or the arched fillet above the frame to be more precise. This has proved to be difficult to get right, partly because the brickwork is not very even. The solution was to knock out the loose bricks and reset them using the fillet as a former. This is time-consuming but should result in a nice sound finish. 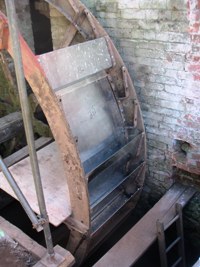 Derek collected scrap timber and brushwood and soon had a good bonfire going. Apart from a brief period when the wind changed and threatened to smoke us all out we are grateful for Derek’s efforts to keep the site tidy.

Colin and Headley spent the day bolting more buckets and plates into the waterwheel. The amount of new galvanised steel fitted to the waterwheel now exceeds the old steel that we have left in place. The photo doesn’t show the number of bolts that hold each plate but there is a bolt every six inches or so and that adds up to lot of bolts. By the sound of things, most of them need to be persuaded into place with a two pound hammer. Its a good job there are no neighbours to complain about the noise! 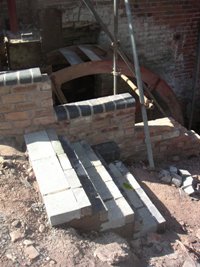 The Court House team have finished all the brickwork on the main dam but still need to rebuild the side wall. It now seems unlikely that the pool will be full in time for the first hill-climb of the season in less than two weeks time, but a great deal of work has been done to a standard that should avoid problems for many years to come.

Back at the mill, John has created a second flight of three brick steps by the side of the waterwheel. He has taken considerable trouble to ensure that this flight matches the higher set of steps that he built last week and has used the same construction method of concrete blocks with engineering brick facings. As ever, mortar was supplied by Richard who spent the rest of his time cleaning up old bricks.

Read about the brick steps? Click here to see the previous article.