The bottom bearing comes out 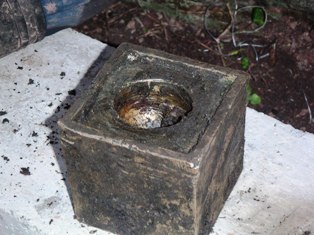 The bottom bearing that we had struggled with last week yielded to persuasion this Tuesday and emerged from its oak bed. We had been worried that it might be worn out, with the possibility that the pin on the bottom of the centre post would break through the bearing into the oak beam.

The bearing is certainly worn, but it has a few years left in it yet, say 100 or so. The whole thing is basically a cube of bronze with a pit in the top.

Elsewhere, Derek was making a good start to roofing over the tailrace and Richard continued to chip the rust off the waterwheel. Between the noise of the compressor and the rattle of the needle gun it was anything but a quiet day. As earplugs were being worn the conversation was a bit sparse so it was quiet in that way!

Doug spent his last full day in England before returning to Australia making himself generally useful and tidying up the site. We tried to persuade him that he could commute from Sydney to carry on helping but he didn't seem convinced.

Most unusually, no bricks got laid today. John is taking a break on the coast and as far as we know he has not taken his trowel!

Read about the bottom bearing? nLook for other posts.