Before the belt drive title is explained it is time for an apology. This week's blog entries have been delayed by a series of minor computer malfunctions that have built into a major frustration for the webmaster. Blog writing was suspended to avoid the risk of low flying computers being seen over Worcestershire. 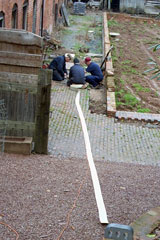 Progress at the mill has been much better than that with the belting material arriving on Tuesday, along with the necessary jointing kit.

The belting was donated by MAC member Keith Squires who has yet again proved to be a good friend and supporter of the Mill Society.

This meant that we could fit the belt drive from the PTO shaft pulley to the line shaft pulley, taking power from the waterwheel into the hay-loft.

The length of belting required was carefully measured and cut and the hinge joint fitted.

The belt was fed over the pulleys and the ends joined together. Time to give it a try. Pulling the belt round by hand didn't show up any major problems so the PTO gear was slid into engagement with the pit gear.

Pedalling the waterwheel round still didn't show up any problems so it only remained to try it under water power. No problems, it ran smoothly and silently even though we still don't have bearing caps for two of the PTO shaft bearings. The wooden block in the centre of the universal joint behaved perfectly. There were a lot of happy faces walking around on Tuesday afternoon.

One of the happy faces belong to Finton, so if Mrs Finton is reading this she will know were he was. Other team members on the two days included Dick, John D, John N, Max and others mentioned below. If anyone feels left out they are free to complain to the webmaster. 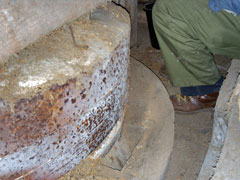 Inside the mill, Jim and Richard carefully lifted the downstream tun to see how the flour chute was constructed. This pair of stones has not been disturbed until now as we needed to retain it as it was for reference.

They discovered that this pair of millstones are both french burr stones, unlike the upstream pair which has a gritstone runner.

No attempt was made to separate the stones, but it does look as though this runner stone has quite a lot of wear left in it yet, with four steel bands still in place.

Having learnt what they needed to know Richard and Jim replaced the downstream tun and went back to working on the upstream one.

Thursday saw more long awaited materials arriving in the shape of a pallet pack of double bull-nose coping bricks and a quantity of steel.

The coping bricks will be used to put the finishing touches to the walls around the mill and the steel is going into the gratings that we have Listed Building Consent to put over the PTO shaft were it crosses the alley between the mill and the stable barn. 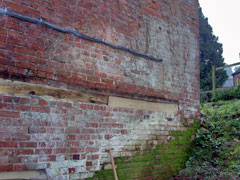 Jonathan finished the repair job he has been doing on the wall plate in the north wall of the mill, fitting a piece of oak to reinforce the decayed timber at the end nearest the road.

Martyn, Colin, Dave and Headley all worked to cut steel to length so that it can be welded into the gratings needed to cover the PTO shaft.

The gratings will allow a good view of the PTO shaft and its massive universal joint but will keep prying fingers well away.

We are getting quite close to being able to demonstrate another piece of machinery, the chaff cutter. The location for the machine has been cleared and it just needs a coat of limewash to be ready. This will be the first piece of what was really a 19th Century belt drive biofuel processing plant.

The watermill powered the millstones and the other machinery to process feed for the heavy horses. These were the prime movers on the farm and in the countryside before the internal combustion engine took over and a lot of farm land was taken up producing food for the horses.