The team got together this morning in very grey weather but were cheered up when Max produced this apple box. 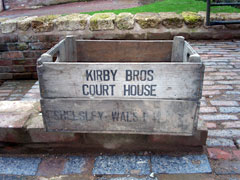 The mill was always part of Court House Farm so this box is exactly right as the kind of 'window dressing' that makes the place come alive.

The opposite side is printed 'Shelsley Walsh, Worcs' on both planks and the two ends are stencilled 'Deposit 6/-'. Six shillings in old money is 30p today which was a substantial deposit in the 1950's.

For the time being the apple box is living under the root shredder as it is just the right size to  catch the shreddings.

Today's team consisted of Max, Dave, John, Jonathan, Dick, Headley and Richard. Jonathan continued the task he started on Tuesday repairing one of the front steps. while Max and John worked in  the hayloft, preparing the walls for a coat of limewash, hopefully to be done by the MAC working party at the weekend.

Headley, Dick and Richard used a combination of heat and brute force to remove the top bearing  sleeve from the downstream stone spindle. This is not as badly worn as its upstream companion was but is  sufficiently bad to justify replacing it while we have the spindle out of the stones.

While it was all gas torches and hammering inside the workshop Dave was working from the scaffold tower to chase out more mortar for yet more helibar reinforcement.

The dust was soon damped down by a light but steady rain so Dave was forced to don waterproofs to get the job finished.

John helped with the final bit of pointing up and the finished result should last for many more years.

The weather did put a bit of a dampener on the day but it is helping the newly seeded lawn between the stable block and the barn to green up well. The whole area is beginning to look smart.

Go to the previous entry before this apple box story