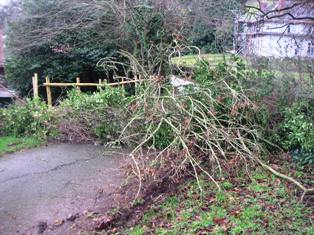 Stormy weather caused some excitement today for the small team that made the trip to Shelsley Watermill. No sooner than we had arrived in the farmyard, shortly after ten o’clock, then there was a loud creaking noise and a tree fell across the return road only a short distance away. Apart from knocking a couple of rails from the fencing it doesn’t seem to have done much damage.

Once we had recovered from that surprise we walked round the corner to the mill and got our next shock. Water was roaring from the sluice box over the wheel and spraying around. We had deliberately left the penstock valve open to keep the pool drained and what we were looking at was just the sheer volume of rainwater that fell last night.

The stream that drains the hill and will fill the mill-pool normally finds its way into the bypass culvert without causing us much concern but the rain had swollen it so much it had over-topped our earthworks and pouring through the penstock. The volume made it difficult to repair the crude dam but we managed it eventually and relative order was restored.

Nothing to do with the weather, but we had a much depleted team today. Martyn arrived complaining of a heavy cold and went home again. He just wants to get on with his Stag really; the cold was just an excuse. That left John, Max and Richard to do some work on the mill. 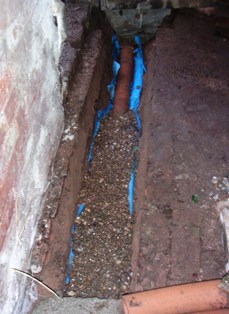 John worked on the brick piers inside the mill while Max concentrated on restoring the drain system we cleaned up on Tuesday. Richard mixed mortar and generally tried to keep the other two supplied and working. Probably because Martyn wasn’t there cracking the whip we got on very well. The drain is fully reinstated and only needs the brick floor replacing above it, while a good start has been made on three brick piers.

Maybe it was the stormy weather, but we really kept our heads down and got on with it today. Even the cement mixer stayed indoors to work.