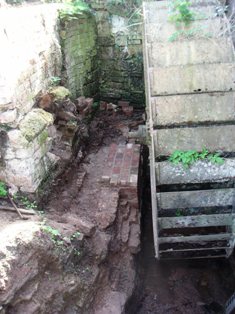 Work on the bearing plinth and the tailrace continued on Tuesday. John worked hard at laying the final layer of brick paving on the plinth while the rest of us worked on building a retaining wall for the side of the tailrace.

The retaining wall will not be visible when the tailrace is covered over again so we are using concrete blocks as well as bricks. Once the walls are made good we can start removing the side of the culvert to provide a full opening to the stream. We already know that the opening we already have can take the flow from the sluice but we need to ensure that the side of the culvert is secure. 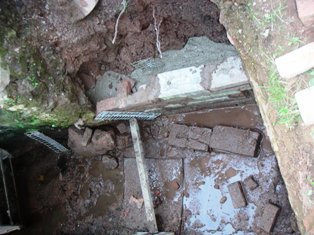 At some point in the past the roof of the culvert was supported on a steel beam. We don’t know how long ago that beam was put in but it has been in a damp atmosphere above the stream and is now a large block of rust without much strength. It has to make sense to replace this beam while we have to culvert accessible to avoid dealing with a cave in at some point in the future.

Less physical, but just as interesting, I spent the evening at a meeting of the Teme Valley Historical Society listening to Mark Joseland of the MAC giving a talk on the history of the hillclimb. When the talk was over I took the opportunity of appealing to the members for any information they might have about the mill and the surrounding area. As a result I now have a diary page full of names to contact.