Four team members worked on three tasks today, guttering, brick steps and the culvert, and the weather was kind to us. Martyn, Colin, Max and Richard made the most of a mild and dry day. 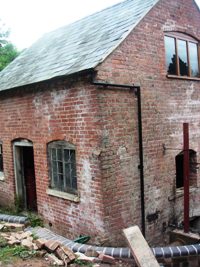 Martyn and Colin concentrated on the rainwater goods on the west side of the mill roof. They completed the last of the fixing and levelling of the gutter, trimming the supports and painting the exposed metal against rust. That done, they switched their attention to the down pipe into the wheel pit, completing the fixing and again painting any exposed metal. By the end of the day it was all looking quite neat and tidy. We are also hoping that by collecting rainfall and directing it into the wheel pit the silt build up in the tailrace will be reduced.

Max has been rebuilding the brick steps up to the old hay-loft for a few days now and he spent the day shifting the last of the loose brickwork from the top of the steps. This proved to be a major job and there were a couple of occasions when more hands were needed. The metal handrails were cut free and kept for later complete with the concrete they are set into. Once these were removed Max could get at the network of roots that have destroyed the outside of the steps. The underlying brick arch is still sound but the wooden beam that takes the thrust of the arch at the top of the structure has all but rotted away and will have to be replaced. The picture gives a good idea of the way the steps are being rebuilt and also give an impression of how far the weeds and roots had penetrated into the old brickwork. 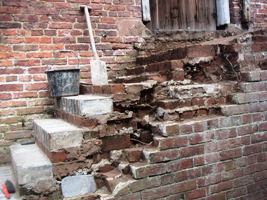 The heavy rain that caused severe flooding recently did not leave the mill completely unscathed. There was a fair amount of mud inside the mill, carried in by the volume of rain that fell and the culvert that carries the overflow from the mill-pond also suffered. In the case of the culvert there was a fair amount of rubble, whole bricks and smaller stone, swept into and through the culvert. As the flow reduced some of these were left behind and caused the flow to slow down, leaving loads of silt around the rubble. Richard spent a large part of the day clearing the rubble and the silt out of the culvert to where he could shovel it out of the stream.

Admired the guttering? Click here to see the previous article.