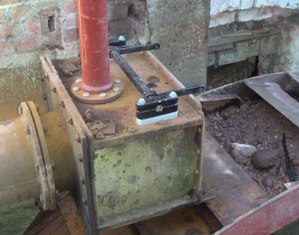 This Thursday was a crisp and sunny day at Shelsley Mill. The mud was frozen solid underfoot and the team were able to get really stuck in to some work instead of getting stuck in the mud.

Dave and John worked on separate brick piers inside the mill while Headley continued to work on the control gear. Max and Richard mixed lime concrete and then lime mortar and extended the tufa wall by the waterwheel. Martyn spent all day chipping mortar off old bricks.

That is the basic story of a crisp and sunny day at the mill, but it doesn’t give the sense of satisfaction that we all seemed to feel on having made good progress with a number of tasks.

Neither of the piers that Dave and John worked on is finished, but there is visible progress. This was in spite of the bricks being frozen! It wasn’t obvious that the bricks were frozen until they thawed out and released lots of water into the mortar. This caused much muttering amongst the bricklayers as their carefully crafted joints wept down the faces of the piers. Even with this set-back the piers have grown sufficiently that they should be finished in one more session.

Martyn’s efforts with the brick hammer means that there are now enough bricks cleaned up and under cover to finish the two piers already started and go some way towards building the last two. True, the bricks are being stored on the floor that the piers are being built to support, but isn’t that what acroprops are for? Cleaning bricks allows the mind to explore ideas while the hands carry on the job. Martyn took us by surprise by asking “Are we going to buy a barrel of beer for the grand opening, or should we have champagne?” The answers suggested that he was getting just a bit premature.

The tufa stone wall by the waterwheel is a major job, not least because some of the stones are only just liftable. We are filling the space behind the stones with lime based concrete to match the porosity of the stones themselves. This caused a short pause in the work because we ran out of hydraulic lime but we managed to borrow a bag from the team at the Court House. The new supply meant that we could mix some lime mortar and set some more stone in place.

At lunch-time we even managed a committee decision on which quote to accept for the replacement hardwood windows for the top floor. Hopefully these will be available to go in while the roofers have scaffolding in place, because it will be much easier to fit them that way.

The crisp and sunny weather kept us working until after four o’clock, but it did go very cold as the sun disappeared behind the hill.

Read about a crisp and sunny day? Click here to see the previous article.